Politics in Australia can be confusing for international students. In fact, even Aussie locals sometimes have difficulty understanding who’s who in the zoo. The Liberal party veers towards a conservative cultural outlook, for example. Navigating this landscape can be tricky, so we’ve put together a quick explainer on Australian politics.

Since the end of World War 2 Australian politics has been dominated by two major parties:

The ALP is a traditional centre left party founded in 1901. It’s constitution states that is is a democratic socialist party and has traditionally represented the rights of workers within industry and strong social programs.

The Liberal Party forms the largest party in a coalition with the National Party and Country Party. Formed in 1945, it promotes economic liberalism and cultural conservatism. The liberal party currently holds power in Australia. The Prime Minister is Malcolm Turnbull.

Several smaller parties help round out the balance of power in the senate and house of reps.

Environmentally and socially conscious, the greens are a traditionally progressive party that often holds several seats in government.

Traditionally, the nationals share similar values to the Liberal Party and typically form a coalition government with them.

Due to the nature of Australian politics and voting, it’s not uncommon to see parliamentary members voted in as independents. Fringe parties like far-right One Nation also rise and fall over the term.

The Prime Minister of Australia is the leader of the party that holds majority seated in the House of Representatives. As such, the Australian People don’t vote specifically for the Prime Minister.

Political parties can change their leadership according to the statues of their party. As such, leadership changes (sometimes referred to as a ‘spill’) can and do happen. Notables include Malcolm Turnbull ousting Tony Abbott and the leadership swap between Kevin Rudd and Julia Gillard.

How government works in Australia 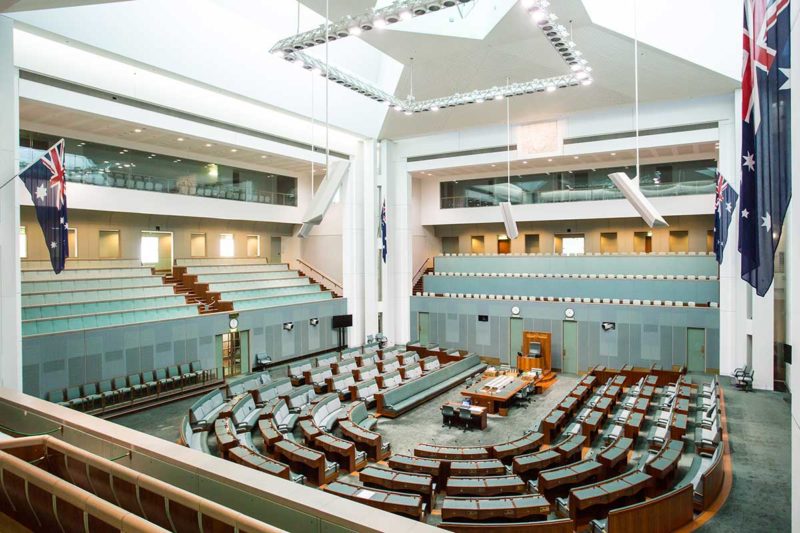 The House of Representatives, Canberra

Formally known as the Commonwealth of Australia, Australia is both a constitutional monarchy and a representative democracy. Here we breakdown how Australia’s government works.

Technically speaking, Australia is a constitutional monarchy, in that the ultimate head of state is the Queen of England who is represented by the Governor General.

However, most Australians will tell you that England has very little to do with the day to day politics of Australia. In conversation, the terms Federal and Commonwealth are often used interchangeably.

The Constitution still states that executive power is vested in the Queen and exercisable by the Governor-General. In reality, it is the Prime Minister and cabinet that possess executive power. This is because:

The House of Representatives (sometimes referred to as the ‘lower house’) comprises of 150 members elected by the Australian people. It is the house in which Government is formed. The political party with the most seats holds executive power and the leader of that party is the Prime Minister.

Sometimes referred to as the ‘upper house’, the Senate comprises 76 members, with 12 from each state and 2 from each territory. The Senate reviews proposed legislation that passes through the House of Reps and shares lawmaking ability with the lower house.

State government functions in a similar manner to Commonwealth / Federal. There are six states in Australia, each with it’s own constitution. Australians vote in a separate election for their state government, which has both a lower and upper house. The leader of the state is the premier, and the monarch’s representative is the Governor.

States can pass law on any matter that doesn’t fall under the Commonwealth which can be found under Section 51 of the Australian Constitution.

There are actually 10 territories in Australia, though 8 of them are quite small. The other two, the Northern Territory and the Australian Capital Territory (which is where you find the Commonwealth Parliament) have more rights of self government, and are essentially treated like states.

Australians also vote in local government elections. This third tier of government is represented by Councils which look after local issues like park and footpath maintenance.

How voting works in Australia

Australia’s system of voting is one of the most complex and misunderstood in the world. The Preferential Voting System is unique to Australia and represents the diverse number of parties and political opinions in the country. It allows for the ranking of candidates in any election, either by the voter or through the candidate assigning preferences themselves.

Under this type of voting, your vote is never truly ‘wasted’. If you vote for a candidate who doesn’t get a majority vote, then your vote moves to your next preference (or the preference of that candidate if you allow them to choose for you). However it does make for a complex system that is misunderstood both domestically and abroad. For a great rundown on how it all works, check out this insightful article at SBS.

Political discourse seeps into all factors of Australian life, from immigration and the histories of indigenous people, to the cost of housing and the rights and freedoms of the individual. To find out more, check these handy online resources which represent both contemporary and historical Australian politics.

Geared more towards high school students, this app is still a worthy introduction to the broad Australian political landscape. Covering everything from indigenous history and culture to population growth and rights and freedoms in Oz.

With over 4000 games, stories and resources available through a single app, it’s a veritable treasure trove right on your phone or through the web portal. Find out more here.

Michelle Grattan AO has over 4 decades of experience in the Parliamentary press gallery. In this podcast she talks both current events and historical political discourse with a variety of experts. From Derryn Hinch to Gladys Berejiklian and Josh Frydenberg, you’ll find politicians speaking their minds and answering tough questions on contemporary Australian politics. Downloads the latest pods on iTunes.

Don’t be fooled by the name, this regular podcast recorded by Melbourne’s La Trobe University has a strong focus on the domestic impacts of global political events. You’ll also find interesting audio on Australia’s closest neighbours, China and the South East Asia region.

With over 100 podcasts already available, it’s a tantalising repository of political info. Be warned though, as you might expect with a university developed podcast, the content can be quite heavy at times. Find them all on iTunes.

Lonsdale Institute has over a decade’s experience as a leading provider of education and training for both Australian and international students.

Our team can help you plan your future